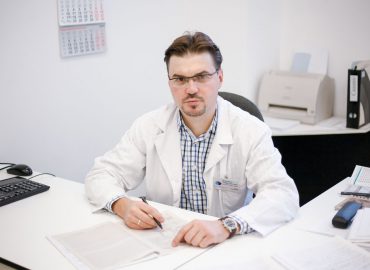 Pediatric surgeon of the highest category, specialist in endoscopic surgery.

My philosophy: A victory over the mother’s and child’s disease is the best blessing on what you are doing and improving constantly.

1997 – graduated from Lviv Medical Institute, Faculty of Medicine; an internship in pediatric surgery on the basis of the Pediatric Surgery Department, LNMU named after Danylo Halytsky. Directed by a children’s surgeon in the Skoliv CRL.

From 1999 to 2015 – he worked as a surgeon at the Endoscopic-Operational Department of the LOR LODKL “OKHMATDIT”.

From 2016 till now – is the head of the endoscopic-operational department of the KZ LOR LODKL “OKHMATDIT”.

From 2010 till now- he is the initiator of the creation and head of the Center for Mini Invasive Surgery of Children and Newborns KOR LOR LODKL “OKHMATDYT”.

From 2000 -2010 he was a teacher and assistant of the Chair of Pediatric Surgery at LNMU of Danila Galitsky, English-speaking department.

The author and co-author of more than 40 scientific works on pediatric surgery and urology – sections “Correction of lung-shaped deformation of the chest”, “Laparoscopic non-invasive interventions of child and urology” and others.

– 2000 – Center for the Health of Mother and Child named after Ivan Paul II, Katowice, Poland.

– 2001 – Clinical Hospital of the Schloss Academy, Department of Surgery, City of Bitom, Poland. Endoscopic-Laparoscopic Surgery Course. Has passed the exam “Laparoscopic cholecystectomy” No. 157/00/01 of 20.11.2001.